The Saboteur – A new novel by Andrew Gross

I am delighted that one of my images has been chosen to be used as a background on the cover of a new novel by Andrew Gross, the New York Times bestselling author of The Best Man. 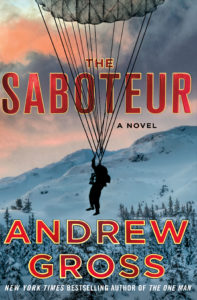 The Saboteur by Andrew Gross

The image was taken near Gaustatoppen, Rjukan, Norway at sunrise on a stunningly beautiful -20C morning.

From a recent interview……. What project is next on the horizon for you?

I’m staying in the same vein. I want to write stories based on historical fact that I can take in a different way. I’ve already finished the next novel, based on British and Norwegian raids to put an end to the Nazi efforts to create an atomic bomb. It’s kind of an old fashioned Alastair McClean WWII adventure called The Saboteur— one person’s staggeringly courageous act (which has never received much attention) that may have singlehandedly altered the war.

This new book can be preordered here. Some information on his previous book below.

1944. Physics professor Alfred Mendl is separated from his family and sent to the men’s camp, where all of his belongings are tossed on a roaring fire. His books, his papers, his life’s work. The Nazis have no idea what they have just destroyed. And without that physical record, Alfred is one of only two people in the world with his particular knowledge. Knowledge that could start a war, or end it.

Nathan Blum works behind a desk at an intelligence office in Washington, DC, but he longs to contribute to the war effort in a more meaningful way, and he has a particular skill set the U.S. suddenly needs. Nathan is fluent in German and Polish, he is Semitic looking, and he proved his scrappiness at a young age when he escaped from the Polish ghetto. Now, the government wants him to take on the most dangerous assignment of his life: Nathan must sneak into Auschwitz, on a mission to find and escape with one man.

This historical thriller from New York Times bestseller Andrew Gross is a deeply affecting, unputdownable series of twists and turns through a landscape at times horrifyingly familiar but still completely compelling.

ANDREW GROSS is the New York Times and internationally bestselling author of several novels, including No Way Back, Everything to Lose, and One Mile Under. He is also coauthor of five #1 New York Times bestsellers with James Patterson, including Judge & Jury and Lifeguard. His books have been translated into over 25 languages. He lives in Westchester County, New York, with his wife, Lynn. They have three children.